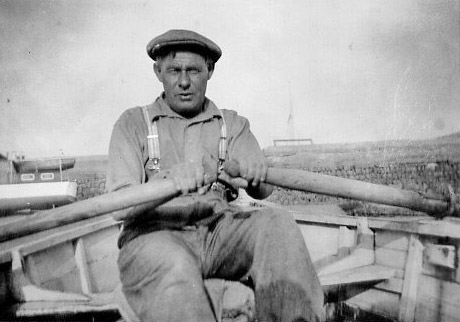 Brightie would like to recall the name of the Ferryman - does anyone recognise him?
Picture Added on 02 October 2007.

Probably Richard 'Dick' Cutting who took over from Charlie Cutting in about 1931
Added by Brian Parks on 06 October 2007.
This is my Grandfather Dick Cutting, my Mother is Hazel Irene Cutting who left Rye during 2nd w/war to live in Birmingham were she still lives and married my father Jack Taylor (unfortunately died November last year). My Grandmother used to own the tea rooms on the harbour which was a disused railway carriage.
My Grandfather left Rye in the 50s to live in Birmingham (much to his disgust) because all the Cutting family were living there and my Grandmother wanted to be near her children, Dick Cutting and Doug Cutting (both have died).
My Mothers sister died Ivy Cutting died at an early age after being severly burnt when her dress caught fire while combing her hair in front of the fire.
Hope you find this information helpful.
Added by Bernard Harold Taylor on 17 March 2008.
My grandfather was William James Cutting, Dick Cutting was his brother, I can remember a Doug Cutting coming to visit us up north when I was young.
Added by Carole Wilson Nee Cutting on 24 August 2009.
My grandfather was Frederick Walter Cutting, Dick Cutting was his brother, Frederick Walter Cutting moved down to St Just in Cornwall. Its nice to see photos of the family that we have never met and know very little about!!

Added by Jean Elizabeth Small (nee Cutting) on 03 September 2012.
Dick Cutting was my Grandfather. My mother was his daughter(Hazel Cutting)I was five when Grandad died he used to say to me look up there, there is Dr. Skinner, look down there is his dinner. We still have some Cuttings left in the family. We all remember Grandad.
Added by Janet Woodyatt on 10 September 2012.
My family originated from Rye Harbour and moved to Rye just before the second World War. William Cutting was my Grandfather's name and Raymond Cutting was my father's. He married my mother from Hastings (Doris Moon)and they named me after Roberts and Ernest Cutting (of the Lifeboat crew of the Mary Stanford). I also have brothers and their families in and around Hastings. I left Rye in 1958 to join the Army, married Margaret Curtis of Rye in 1964 and now live in Abingdon, Oxon. We have a daughter, two sons and four grandsons, two carrying on the Cutting name.
Added by Roberts Ernest Cutting on 17 January 2016.
My grandfather was Frederick Tillman and I am interested in finding out how the Tillmans were connected to the Cutting family. Fred and his brothers lived with their Uncle Ned Cutting in 1915 at Rye Harbour, does anyone know how this connection came about and whether they were related. My mother, Fred's daughter told me that following the Mary Stanford disaster the Tillman family were much affected by the loss of so many of the Cutting men who drowned.
Added by Penelope Hills on 18 March 2016.
Has anyone ever done a family tree of the Cuttings. I'm the youngest brother of Janet and Bernard.
Added by Mike Taylor on 11 November 2016.
My Grandfather was Frederick Walter Cutting from Rye Harbour, He was first cousin to Robert and Ernest Cutting (of the Lifeboat crew of the Mary Stanford).

Added by Jean small on 24 November 2016.
Looking at the family history, I believe Frederick Tillman was actually Edward H Cutting 1866-1940 step Grandson so possibly Edward was referred to as Uncle Ned ?

Added by Julia Cutting on 27 June 2021.
I have a framed picture here at home saying " Great Grandad William Cutting, (Ferryman Rye Harbour)" Is a nice pic of him sitting outside the Ferryman's hut. I was curious about this so Googled him. My name is Dave Caister, my Grandfather was Frank Caister my Grandmother was originally a Saunders and they lived in Tram Rd in RH. I'm guessing that he was my Dad's (Derek) Great Grandad?
Added by Dave Caister on 28 December 2021.