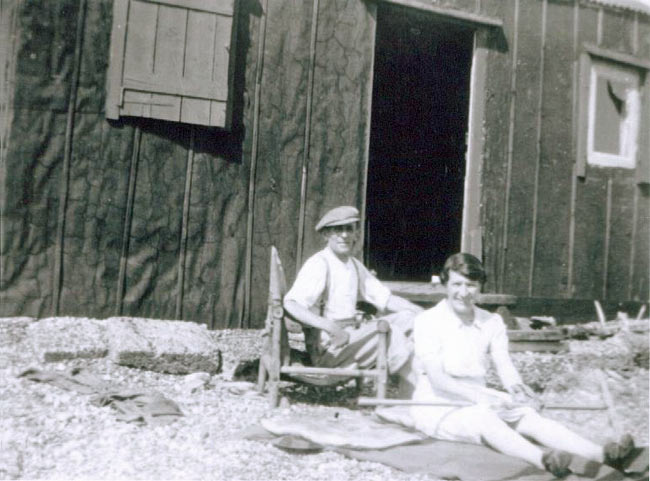 My memories of ‘Gran’s Hut’ at Rye Harbour

My great gran, Sophia Clara Honeysett who lived in Udimore Road, Rye owned the distinctive hut with the red roof on the beach at Rye Harbour.
Granny Clara, as I knew her, owned the hut for many years in the 1930s right through to her death in the late 1950s. My first recollections of the hut were when I was very small and well remember going down there with my parents, great gran and various aunts, uncles and cousins. It became a meeting place for the family and regular trips were made in the summer to ‘Gran’s Hut’.
We were down there when I was three on the day the second world-war was declared. I have a photograph of the family – including me- sitting in one of the concrete rings that were scattered on the beach at the time. Even after the declaration of War we continued to ‘go down to the Hut’ as gran had a pass that enabled her to have access to the hut. I remember treading very carefully with her as she held my hand as we walked down, what seemed at the time, a very narrow strip that was cordoned off. On both sides of the cordon mines were laid and I was told to ‘hold granny’s hand very tight’.
In the forties and early fifties I remember the outside of the hut was felt and battened that had to be tarred regularly to weather proof it. I do not know when the outside changed to corrugated iron as it is today.
I also remember the inside of the hut contained shrimp nets which were laid across beams in the roof. Fishing lines were also kept there and my Great Uncle (Dave Martin) used these to fish off the sea wall at the back of the hut for eels. I also remember shrimping off the groyne at the entrance to the Harbour and, when successful, we cooked the shrimps over an old primus stove outside the hut. As there was no fresh water available I believe the shrimps were cooked in sea water.
Just inside the hut there were two earthen-ware drain pipes covered in shells and a range of umbrellas in them. I am not too sure if these were covered by great gran as they were always there but she was always busy making things. She used to plant flowers in the hollow concrete blocks to the front of the hut making it look very attractive. We had a small table with a multi-coloured oil-cloth and one or two very old deckchairs. The inside of the hut contained numerous attractive sea shells that had been collected off the beach over the years.
Toilet facilities were very primitive with only a bucket for emergencies. We were not allowed to sleep in the hut but on the odd occasion we did. I remember being told not to ‘show any lights’ but remember the excitement of hearing the sea and waking to the sound of seagulls.
The family used the local bus from Rye to the Harbour and then walked the distance down to ‘Gran’s Hut’.
A narrow gauge construction train was used to provide the materials to lay the road that now leads to the sea. I believe this was just after the war.
The hut has also appeared in a film. Much to my surprise when watching the Dunkirk Film – they used Camber Sands for filming- there was ‘Gran’s Hut’ in the background.
My memories of time spent down in Rye with the family are very happy ones. I was only three when the second world war was declared but remember the memorable times we continued to have on occasions when we visited the hut.
I still return to Rye on frequent visits and always make a special point of walking the Harbour Road, marvelling at the Nature Reserve and looking at ‘Gran’s Hut’.

The photo is of Oliver and Daisy Honeysett outside the Hut in September 1939. Daisy is holding one of the shrimp nets that were stored in the hut.
Added by on 25 July 2006.
Such a great little story. I love the hut and each time I go - having forgotten quite how far along it was - I have a little moment of fear that it may be gone. Still there last Saturday (29/9/18) I'm very glad to say
Added by Coralie Mattys on 02 October 2018.
Brought up our 2 sons nearby and often took them for walks near the hut. Moved far away but thrilled when at RA summer show to see a wonderful photo of it. Couldn't afford original but now have a print, which reminds me of those simpler days each time I pass it.
Added by Krysia Davis on 18 October 2020.
Hi do have any photos of Granny Clara?
Added by Susan Reay on 14 September 2021.
Any photos available of Sophia Clara Honeysett?.
Added by Susan Reay on 14 September 2021.