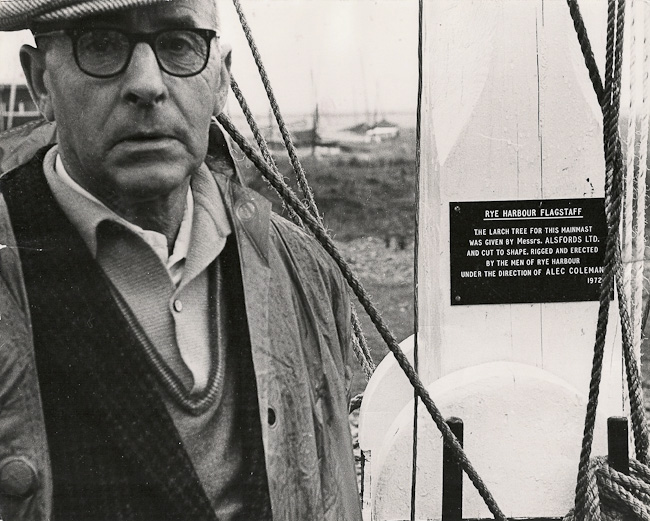 Alec Coleman and the flagpole

In 1972 the making of the new flagpole was masterminded by Alec Coleman. The flagpole was damaged in storms in February 2020 and is to be dismantled and unlikely to be replaced.

This is Alec's obituary written by his son Chris.

The name Eugene is unusual. It comes from the experiences of Alec’s father Stephen during the Boer war. Apparently Stephen's Commanding Officer was named Eugene and he was much admired by his men, so Stephen named Alec after him as a tribute.

Alec was born on Monday October 8, 1906, at Knelle Farm Cottages, Beckley, Sussex (now holiday cottages). He spent the first eight years of his life at Knelle Farm, but in 1914, the Christies, a large landowning family in Kent & Sussex, sold the large estate and broke it up into several farms that survive today. Knelle was famous for its excellent herd of Sussex cattle and good Hops.

Alec and his older sister Edna went to school in Beckley and they had to walk approximately three miles across fields every day there and back. As a result of the Knelle estate being sold, in 1914 Alec moved with his parents Stephen and Annie (Ellen) to Castle Farm Winchelsea.

Alec spent much of his time at Bosney Farm Iden (about five miles distant), with his cousin Gertrude (Gertie) Coleman (daughter of Richard Coleman and Eliza Pettet - Richard being the brother of Alec's father Stephen). Alec's mother Annie was deaf and so he knew how to speak using sign language with his hands.

Alec and Edna attended school in Winchelsea and when Alec left school in 1919, he worked on Castle Farm Winchelsea with his father Stephen and also was a bread and milk delivery boy for a shop in Winchelsea. Alec became friends with a Joseph Stonham and they used to come to Rye Harbour regularly sometimes with the Winchelsea Football Club where Eva was friends with Joseph's sister. Alec and Eva met in about 1927 as a result of this mutual friendship (Joseph was killed 1928 in the Mary Stanford Lifeboat).

Before they married in 1933, Alec used to ride his pushbike from Winchelsea to Udimore to visit Eva (in service then) to do whatever young people do. At this time he was delivering bread and milk for a shop in Winchelsea.

In 1928, Alec moved to Tanyard Cottages Winchelsea with his parents when his father Stephen retired from Castle Farm (Stephen had to retire from Castle Farm because he suffered from Asthma). Stephen's wife Annie stayed on at Tanyard cottages after she was widowed in 1930, and when they married in 1933 in Rye Harbour, Alec & Eva lived next door until they moved to Rye Harbour in 1936. Cecil Granville Eastwood (known as Mons) was Alec's best man.


After they married in 1933, Eva worked as Parlourmaid in Periteu Mental Home Winchelsea until 1936, at the same time as her sister Caroline was Cook. Alec now worked for two builders, Ashendens of Rye, and Neeves Builders and he clearly had great talent in the building and engineering trades as he was to use them greatly in the years to come. In 1936 they moved to Rye Harbour and Alec's mother moved with them having been widowed in 1930.

Alec now went to work with Charles Southerden (Eva's father) and Jack Moon as a boat builder and repairer. They built their workshops on old wrecks that used to be on the River Rother at Rye Harbour and they continued a successful business for a number of years until Charles died in 1939. One of the first boats they made was the 'First Event'.

When Charles died in 1939, Alec went to work on Merricks farm Icklesham where he stayed until his retirement in 1971. During the 1950s Alec built a boat and named it for my mum - the Eve.