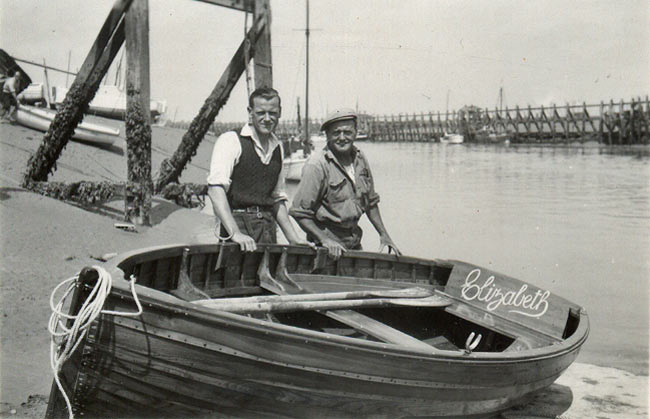 Elizabeth and who and when ?

These were identified during the exhibition in the church on 25/3/06 as Roy Gawn (Pat Gawn's husband) on the left, and Johnny Doughty on the right. It needs confirmation but Johnny was the ferryman for a period. Also the photo date may be 1962 or 1972
Added by Mike Slavin on 06 April 2006.
Don't know about Elizabeth, but the person on the left is Roy Gawn (Pat's Husband)and the one on the right is Johnny Doughty.
Added by Richard Tollett on 06 April 2006.
Tom Pope confirms the people and is sure that Elizabeth was the ferry boat.
Added by Gordon@surfree.co.uk on 26 August 2007.
We are sure this is the ferry boat built for the harbour by Dr Hartley and Alan thinks this would be around 1950/51
Added by Gordon Downey / Alan Haffenden on 23 February 2010.
John Doughty sang the herring song on telly
Added by Rex Swain on 22 March 2014.
Have a look (listen) to this site
www.last.fm/music/Johnny+Doughty/_/Herring's+Heads
Added by Chris Coleman on 22 May 2014.
Looking at the fishing boat tied up on the east side I think it's the Alexandra owned by Alex Hall then Humphrey Lestocq. That being the case then this photo is most likely early 1960s as the Alexandra wasn't built till 1958. 1950/51 is way too early!

Added by Dave Pepper on 30 May 2020.
I remember both Roy and Johnny very well. Legend has it that 'uncle Johnny' could spend all night drinking pints of beer and never have to go to the toilet - he did have a big stomach. In later years he could be found net mending on the fismarket quay in Rye, and I think he lived in Camber.
Added by Chris Coleman on 03 June 2020.